Water-gym has now become a worldwide well-recognized fact: everybody knows it, but only a few know how and why it was born. Its origins date back in time.

The therapeutic effects of water were appreciated during the Greek and Roman periods, and even before, with the Assyrians, the Babylonians, and the Egyptians.
Nevertheless, the concept of a gymnastic movement in water is typical of contemporary times, even because it comes directly from the experience of various athletic exercises practised over the ages; it was not born with a competitive aim, like any sport was, but for different and subsequent needs.

It is difficult to establish who was interested in this discipline first, but an in-depth research has given a name to the person who, in a period when no one did, well believed in Acquagym for its connotation of health more than as a competition. This person made this activity a true water discipline, first practising it just for motor problems (with no business intention), then letting people know and feel involved in this experience, and in the end starting to teach. After a very serious accident in 1984, the actress Eleonora Vallone found that water was the solution to her problems, both physical and psychological. She invented a number of exercises (more than 2,000), which she patented with the name GymNuoto (in Italy) and GymSwim (abroad), based on using ‘The Triangle’, a special floating piece of equipment. She has also published many books.

Later on, she created in Rome the first School for qualified teachers, where the first acquagym INSTRUCTORS were trained. She has lectured on her method successfully not only all over Italy, but also for the Spanish FIN in Barcelona. A real exportable ‘made in Italy’. 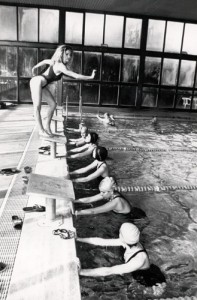 It is by the middle ’90s when in America there are the first signs of tiredness after the great success of Jane Fonda’s ‘aerobics’, a sport which had had the merit of grouping people of different ages, whether they had ever practised any sport or not.
People met for fun, for socializing, for losing weight, or for vanity, but never with a competitive idea. However, inthe course of time, this sport had proved harmful for many, in some cases with irreversible damages: vertebral compression, discopathies, hernias, circulatory, cartilaginous, or bone problems, sprains, tachycardia, and so on. All these came from the high impact of the exercises and from a poor athletic training as well as from a good deal of improvisation and enthusiastic imitation by the people’s part at the beginning.

Now American and Brazilian doctors and teachers had understood that a softer ‘impact’ on the ground was needed. But how?
Very simply, indeed, just doing the aerobic exercises in water; the water level should be more or less not over one’s navel, in order to perform the same movement as in an aerobics lesson, without being a swimmer at all.
Acquagym or Acquaerobics was born.
At this point it was difficult to find a swimming pool with shallow waters, so at first the discipline was practised in children swimming pools, even using their specific piece of equipment, the coloured noodle.

Afterwards appropriate swimming pools were built and equipped, and a lot of people joined the new discipline. It is important to point out the characteristics of these two main activities, different both in their basic ideas and in their further evolution.

GymSwim or Acquagym was born first and as a water activity (it includes more than 2,000 exercises divided into 6 levels and practised in deep water, sometimes underwater though – in this sense, the discipline is recognized by C.M.A.S., J. Cousteau’s International Foundation – in addition to aerobic and anaerobic exercises practised in shallow water, the water level being up to the chest).
The body strikes graceful poses, deriving also from other sports, such as ballet, boxing, running, savate. New swimming strokes are used, such as the helix-nore, or jail breaststroke, with the arms almost always underwater. You can even learn to swim. Positions, music, execution times may vary.
You can appreciate a great sensation of freedom, because you do not do anything similar to what you do on land and there is no constraint. The only equipment you have is the TRIANGLE, useful to better body positions at any age. Respiration through autogenic training is fundamental.
American AcquaGym, instead, was born later and as a ground activity. You need to touch the bottom of the swimming pool, and you practise aerobics exercise standing upright with your arms out of the water. You can do it without being able to swim, the rhythm is feverish, the music volume is high. This kind of AcquaGym will be later exported to Italy and all over the world as Jane Fonda’s aerobics.

Nowadays, at the beginning of 2010 and after a 20-year experience, water-gym is getting more and more success worldwide, just because the impact of the exercises is softened by water, or even eliminated if the water level is congruous. Water-gym is particularly apt to women, who daily practise it no matter if in summer or winter. According to statistics, water-gym is the first sport practised by women in Italy today (football by men). The floating could help the training of other sports, too, so it can be practised by athletes – champions or beginners – no matter what their age and their goal is.

Water follows the form of our body and we can control the intensity of each movement according to our necessities and without any contraindications, unlike other sports.

If any of you knows, teaches, or practises a new water-gym technique, or wants to recommend a water-gym Centre, please contact us to add his/her name and link in our multilanguage water-gym web site (the space is under construction) and create a new ACQUAGYM PORTAL as point of reference for all people loving water-gym and its benefits and want to know where to practise it!

Have a good float!